Posted on November 10, 2014by Executive DirectorPosted in News
00 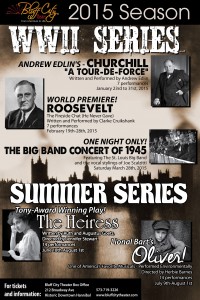 Five productions divided into two series will make up the 2015 Bluff City Theater season for 2015.

The Winter Series marks the 70th anniversary of the end of the Second World War with two plays based on the writings of Allied leaders- Sir Winston Churchill and Franklin Delano Roosevelt.  Andrew Edlin brings his one-man tour-de-force Churchill to Hannibal for 7 performances from January 23 to 31.  Then we present the World Premiere of a new play Roosevelt: The Fireside Chat (He Never Gave) which captures the essence of one of America’s greatest presidents in a poignant and humorous work set on the eve of his death.  Roosevelt runs for 7 performances from February 19-28.   Finally, we capture the spirit of the War Years with a special one night performance of The St. Louis Big Band in a presentation called The Big Band Concert of 1945 and featuring the vocals of Joe Scalzitti.  One night only- March 28th, 2015.

The Summer Series features two of Broadway’s most successful plays based on Victorian-era novels,  running in rep from June 18 to August 1.

The Heiress won three Tonys in its latest revival in 2009 including best revival of a play.  Based on the novel Washington Square, it tells the story of a plain, unsophisticated but wealthy young woman who is swept off her feet by a handsome stranger and promises to elope despite her father’s threats to cut off her inheritance.  The Heiress explores timeless themes of the nature of love and betrayal, parental autocracy and personal independence.

Finally, we present Lionel Bart’s classic musical Oliver!  but in a way you have never experienced before.  Performed environmentally in one of Hannibal’s historic landmarks, the actors lead you on a merry chase through the streets and dives of Victorian London.  You’ll enjoy all your favorite songs in a production that combines a professional cast with talented local youth.

For a limited time only, you can pre-reserve your subscription to all five productions for just $99, a savings of 20% of single ticket prices.  For complete details see our website at www.bluffcitytheater.com or call the box office at 573-719-3226 Monday- Friday between 10 a.m. and 4 p.m 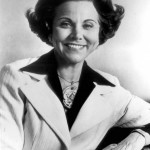 Ann Landers Quote of The Day For February 9th

Posted on February 9, 2016by Executive Director

People who drink to drown their sorrows should be told…