BCT acquired the former F&M Bank building in 2014 and converted it into an intimate 90-seat performance space.

Bluff City Theater is based in Hannibal, Missouri and was founded in 2013.   An artist-driven theater company we place an emphasis on literary works that bridge the gap between books and stage.  While not exclusively limited to literature, our goal will be to explore the written word through stage adaptation.  The works chosen can span a wide array of types including drama, comedy and musicals and could incorporate readings and concert formats depending on the scope of the work and the best method of presenting it within the limitations of the theater organization.  The source material can be from anywhere in the world.  We select our works based on a variety of criteria, but always from an artist-centric bias.  For example, seasons could be built around broad themes, specific authors, specific eras or specific characters seen through the eyes of different authors.

While we are primarily a producing company, we may from time-to-time present other works consistent with our artistic mandate.  We seek to enhance the quality of life for residents of North-Eastern Missouri and Western Illinois by producing high-quality performances employing the best actors, directors, musicians and technicians available in an intimate setting. We commit ourselves to developing new works as well as reviving old favorites, especially those that may be forgotten, under-performed or under-appreciated.

First and foremost, we seek to entertain but our mandate extends to educating audiences and fostering a larger discussion around the works and their themes and an appreciation of the role live theater plays in propagating ideas and public discourse.  As an ancillary to the primary goals, we partner with the larger arts community to, when appropriate, foster a broader exploration of themes using other forms like lecture, film and the visual arts. 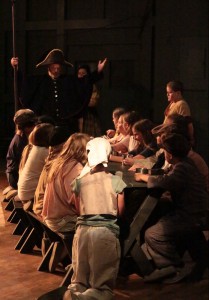 Youth and community engagement are a key part of BCT’s Economic Development Mandate by creating a “theater culture” in the city.

As part of our mandate, we are committed to youth by nurturing an awareness of and love for literature and the performing arts among successive generations.  This is accomplished through a spectrum of initiatives and activities aimed at including youth in the fabric of the theater organization.  In addition, one play in each season is dedicated to children’s literature, historic or current.

How We Came to Be…

Bluff City Theater is the brainchild of Joe Anderson and Wesley Yargus.

Following Joe’s retirement in 2012 from a nearly 40-year career as a media executive, including 25 as Vice-President and Regional Publisher for Metroland Media (Mississauga, Ontario, Canada), the founders undertook a road-trip that included a stop in Wesley’s childhood home of Hannibal,  Missouri.

Throughout his years in publishing, Joe championed many community initiatives in towns and cities across Central Ontario.  He was and remains a firm believer that a business’ success is directly tied to the prosperity of the community and worked to bring the people and resources of his companies to bear on helping to solve community problems and to support community economic initiatives.  Among his many awards and recognitions, he is a recipient of both the Queen’s Golden and Diamond Jubilee Medals for service to community.

In the late 1990’s Joe was introduced to the concept of Creative Communities and the role of culture as an economic driver.  Asked to serve on a committee investigating the proposed acquisition of a 1,000 seat performance center in Barrie, Ontario, he and his committee commissioned what became known as The Barlow Report, a study of the performing arts in the city.  The study determined that there were more than 50 performing organizations in the city, ranging from very small to world-class.  It also found they shared three common problems:

·         They were all struggling to keep their head above water financially

·         They were all struggling to find secure, affordable performance spaces

Despite these struggles, the organizations were responsible for millions of dollars of primary and secondary economic activity in the city and played a key role in defining community identity and quality of life.

Coincidentally, the city was struggling to emerge from almost two decades of industrial upheaval during which 6 major industrial employers had closed or relocated, throwing thousands of workers out of high-paying unionized jobs.  Like much of North America, Barrie, Ontario was facing the daunting question of how to reinvent itself for the 21st century.

Partially as a result of the committee’s work, The City of Barrie set out to rebuild as a “Creative Community” by investing in key “pillars” including cultural and place-based initiatives, downtown revitalization, alignment of local education and employment opportunities, health-care excellence and key infrastructure investments to prepare the city for growth.

Joe’s company made a comittment to support culture in all the communities where it had a presence which led to many important alliances with arts and culture organizations, who came to rely on Metroland Media to help them achieve their organizational objectives.  One of these alliances was with Gryphon Theater and it’s young marketing intern, Arkady Spivak.  After several years of working together innovatively, Arkady announced that he was leaving the area to start his own theater company in Toronto- Talk is Free Theater.  Over lunch, Joe and Arkady struck a bargain.  Arkady would relocate his new theater to Barrie if Joe would agree to chair the board.  Nine years later, they had created one of Canada’s most innovative and successful small theater companies, producing numerous world-premiere plays, winning a Dora Award for best musical, co-producing with larger institutions across the country and mounting a successful European tour.  The experience helped establish Barrie as a premier Canadian theater center which attracts top directors, playwrights, actors and audience from across the country for its now two professional theater companies.

Fast-forward to 2012 and Hannibal Missouri…

Caitlin Mickey and Jason Contini in The Heiress, 2015

After retiring in 2012, Joe and Wesley decided to pay a visit to Wesley’s hometown.  Joe quickly fell in love with the city’s history, ambience and geography,  but he and Wesley were troubled by the signs of neglect throughout much of the historic downtown.  It reminded them of Barrie during its darkest days.  Once the third-largest commercial center in Missouri, hometown of Mark Twain and setting for the books Tom Sawyer and Huckleberry Finn, Hannibal’s industrial core has been decimated leaving once fine mansions, public and commercial buildings sitting vacant and derelict.

The city has long enjoyed tourism centered around Mark Twain, but as Joe notes, Mark Twain is a generational draw- visitors come, tour the sites and leave, not to come back for 20 years.   The key to place-based cultural tourism is to develop attractions and events that bring visitors back year-after-year; that encourage them to see Hannibal a desirable place to live, invest and start businesses.

Joe and Wesley felt that a regionally-significant professional theater would be one way to build cultural infrastructure capable of supporting long-term tourism.  After meeting with community leaders and conducting a series of community meet-and-greets, they decided there was sufficient support to launch in the summer of 2014.

Lacking a performing space, the theater premiered with Tales of an Urban Indian, performed entirely on a moving transit bus.  A powerful and raw play about the experience of being moved to the city after growing up on a reservation, it dealt with issues of racism, teenage sex, homosexuality, alcoholism and suicide yet had a positive and uplifting message about spirituality and life.  The play ran for 32 performances over six weeks and was an audience hit.

In the summer of 2014, the founders acquired the former F&M Bank building at 212 Broadway, a neo-classical style Greek revival building that had been vacant for several years.  With financial, physical and in-kind support from local businesses, the building was transformed into an intimate 90-seat performing space and came into service in January 2015 with its inaugural production of Andrew Edlin’s Churchill.

BCT likes to challenge how theater is performed and has produced two shows environmentally in the derelict 1888 Federal Building at 600 Broadway and one outdoors on the banks of the Mississippi.

As of today BCT has staged 16 productions, including the world-premiere of Unfinished: The Last Fireside Chat and the American premiere of Emily-The Musical.

Directors come from across North America.  Our professional actors, while primarily St. Louis-based have also come from Los Angeles, New York City and Toronto.  For at least one production a year, we put local children and youth on stage with professionals.

While a long way from complete, the journey for Bluff City Theater is encouraging.  Audience numbers continue to grow each year as do subscribers.  More than 50% of our current attendees come from outside the city of Hannibal, most notably from Quincy, Illinois, but from as far away as St. Louis, Kansas City, Iowa, Minnesota and Springfield Illinois.

Audiences continue to be amazed at the diversity, creativity and excellence of Bluff City Theater productions.  One of the most common comments we hear from first-time visitors is, “I can’t believe that something this professional is happening right here in Hannibal.”